Click HERE to RSVP.
Tickets are $8 per person (refunded with book purchase). 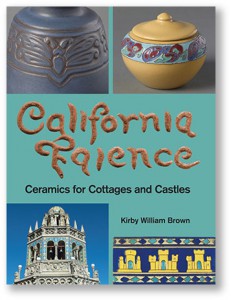 California Faience was one of the pioneering Arts and Crafts potteries on the West Coast in the early twentieth century. Founded by Chauncey Rapelje Thomas and William Victor Bragdon, it is renowned for the high quality and simple beauty of its wares. Operating in Berkeley, California from 1913 to 1959, it was the West Coast’s premier Art Pottery studio, where hundreds of artists and students of all stripes were welcomed and mentored.

“California Faience: Ceramics for Cottages and Castles”, is the book authored by Kirby William Brown about the Berkeley Art Pottery. Brown had copious original documentation to work with, as he serendipitously is the grandson of co-founder William Victor Bragdon. Sumptuously illustrated with over 700 figures of vessels, tiles and sculptures, the scope of this book goes far beyond anything previously published.

Discovered circa 1919 by distinguished architect Julia Morgan, California Faience became the main supplier of the decorative tiles used for the great castle of William Randolph Hearst. In Chapter 5 of the book, Kirby Brown compares drawings supplied by Morgan to finished tiles used at the Hearst Castle and shows how centuries old Egyptian, Persian and Spanish designs may have influenced her designs and colors.

Click HERE to RSVP.
Tickets are $8 per person (refunded with book purchase).

A raffle of several of the California Faience pieces from Kirby’s own private collection will be held following the lecture. You must be present to win. Space is limited, so be sure to make your reservation early.

This entry was posted in Uncategorized. Bookmark the permalink.